May 28, 2017
Day 1 of my two day bronze casting workshop with Mark. Mark is a sculptor and taught at Cardiff College but now works outside the academic environment teaching small (four or less) intensive workshops on bronze casting. He currently lives in Wales on a property that he has fitted out to fulfill his needs for personal sculpting and for the workshops which  are run on a demand basis through Craft Courses UK. I found the workshop under the Art listings. While bronze casting is certainly  not a craft (it’s one of the fine arts) but still, it gives Mark the opportunity to teach on a more intimate and meaningful level.  Caroline and Mark were very accommodating with my request to fit this workshop in my three week visit to the UK so that I would have enough time in between my 5 day Alchemy of Pigments and Sacred Geometry course and theirs since Wales is some distance from East Sussex. 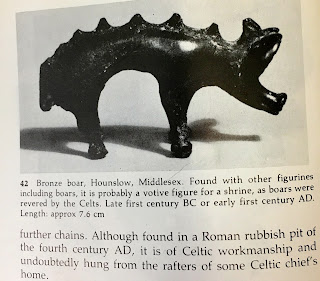 Sculpture is one my favorite styles of art. In fact, my dissertation is based on sculpture but I never had an official art class in sculpting. WCU is not equipped for bronze casting either but it is actually not that difficult. There are safety issues and I can’t imagine our students being serious enough to follow through on all the steps especially those requiring the blow torch to seal the plaster/molokite slurry applied to the wax maquette.  Before the slurry was applied, a shellac was poured over the wax model and left to dry. Then the maquette was dipped into the silicon slurry in suspension  covering the entire maquette as well as the rods and the cup it rested on. The slurry required several applications - first a silicone slurry, then dusted thoroughly with the crushed ceramic (molokite). then dry. Repeat, dry, repeat with thicker layer then dry again. 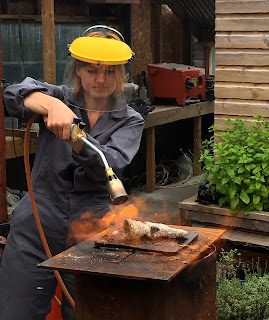 After our molokite/plaster dipped sculptures were thoroughly dry - we had lunch then the blowtorch was used to heat and seal the molokite/plaster (if clay was used we would call it slip). We all got a chance to do this wearing our protective welding like masks. Kate is in the image above torching her Geometric Greek horse. The torch flame had to be held nearly touching the coating in a steady position. No wagging around like giving creme brûlée a caramelized topping from the sugar. And when it was done enough, Mark would say OK and on to the next one. My first experiment was a small and solid Celtic boar. I called it a Boarasaurous because in the illustration in the book on Celtic art, it had stegasaurous like triangular projections on its spine. The snout looked pretty good too. It was not bad - in a stage in between a geometric Greek horse and an Etruscan wolf but not as finely sculpted. It’s going to have a place of honor on my desk standing right beside my Capitoline she wolf with Romulus and Remus pseudo-bronze sculpture.

A wax platform was built for it and below that a cup with rods of wax as channels. The wax coated with torched molokite figures were then placed in a very hot furnace fueled by propane to get the wax to melt out of the channels and leave a space for molten bronze to be poured in. The procedure took a while at this stage before they were ready to have molten bronze poured into the empty spaces. A very large crucible with bronze pieces was in the furnace until the bronze had melted. Since this is a hands on workshop, I got to be the pourer and Kate steadied the holder that the crucible  so she at one end, me at the other and the liquid lava in the middle. It was Mark who removed the red hot bronze in the crucible and placed it in the holder. we all had on leather aprons, our masks on, proper gloves. As Mark gave orders I did what he told me. Nothing like the sight of molten lava like bronze to make you extra cautious. 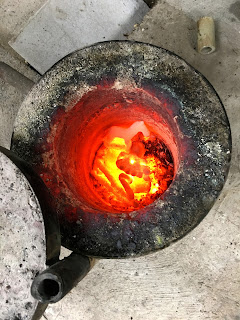 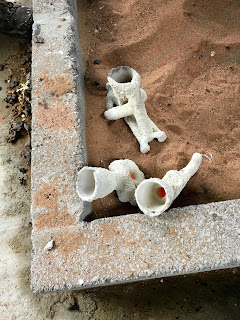 Faster, pour, faster, next, faster, pour, next, pour, done. Then pour out the rest into the sand away from where the little molokite encased bronze figures were resting head down in the sand pit. I have photos of most of the steps and will post this when I do the final editing. I couldn’t believe I had poured hot liquid bronze into three sculpture molds successfully. The figures were then plunged into a trough of water and surprise, even though Kate’s geometric horse had tipped over while I was pouring, it turned out OK as Mark moved quickly and righted it so I could finish the pouring. Mine was in the middle and Quentin’s Giocometti male figure was last. Once the figurines were relatively cool enough we took a hammer and knocked away the ceramic covering around the base of the sculpture - the cup. Tomorrow we knock off the rest of the ceramic and then smooth out where the channels were attached to the wax figure.

Now imagine this, during all this time, we are multi-tasking and working on our larger, real wax model since the first one was our test. However, he declared all of them successful so we each will have two bronzes to take home.

Mark showed us how to make a plaster/molokite core in case we wanted to make a hollow sculpture. He made one for me in a toothpaste box because it was the right configuration for the Lady of Auxerre kore figure I finally decided to make. The hardened core had to be shaped a bit because wax was going to cover it and be molded into the figure. While chiseling it was slow going, Mark gave me an electric sort of drill and protective glasses so I could do the shaping more efficiently. It worked wonderfully. Of course, I was totally covered in plaster dust on my face, hair and shirt. 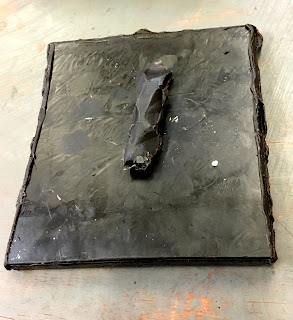 We were supplied with really high quality wax for the modeling - a kind of dark brownish red - much more pliable than the brittle cheap green stuff. So my kore was going to be hollow and the core had to be covered in wax. Since women have colder hands than men generally Kate and I used warm water to soften up our wax because it was strenuous labor trying to get a flat hard piece of wax into something malleable. First I had to get the plaster core covered in wax and then the details of head, hair, arms, etc. I gave her a full braided hairstyle - didn’t know what the back looked like but figured I could do it like New York kouros. Added arms at her side, her high waisted belt, coiled bracelets on one upper and both lower wrists and a serpent on her bodice. She actually looks like a cross between an Egyptian priestess and the Auxerre kore which I don’t mind at all. She’s a little stunner (I hope she comes out well) about 7” tall at the most and a bit chunkier than the kore but not like the Woman from Willendorf. She got fitted out with her wax channels, her cup and ready for her silicone slurry. I did the first slurry and Mark was going to finish the rest as it was getting on to 5:45 pm and were were trying to finish by 4 pm. 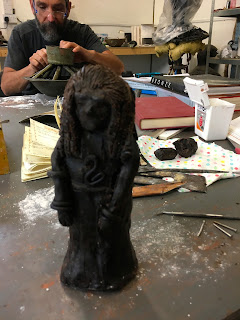 Here she is, the finished wax kore with intricate hair braids in a kind of Egyptian Rastafarian mix. She has a snake on here chest like a Minoan goddess or an Athena, bracelets on her arms like Aphrodite and the pose of the Auxerre kore. 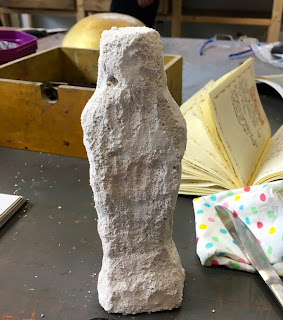 Tomorrow we finish off our sculptures and pour the molten bronze using the same procedure.

Popular posts from this blog 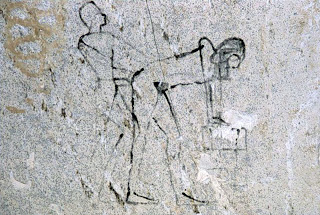 Senenmut taking Queen Hatshepsut from behind, Deir el Bahri   This naughty little drawing might have merited the extreme displeasure of Hatshepsut had she seen it. But when was this pornographic cartoon made? Could it have been at the time of her successor, Thuthmose III? Or was it truly from the time of Hatshepsut with rumors rampant about her favored vizier, architect and tutor for her daughter Neferure? At any rate, it is pretty graphic and unsanctioned paving the way for my comments and images of Greek and Roman graffiti of phalluses and comments about women.
Read more 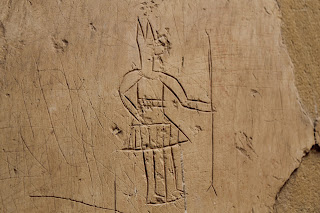 Temple of Seti I at Abydos, probablySekhmet, the lion goddess Some graffiti historians believe that markings making a statement, message or sign can trace their origin to prehistoric times, up to 30,000 BCE. However, this is likely a stretch of the imagination when we don't even know that much about the motives of the mark makers in a period when there was no writing. Scratchings and incised lines on cave and rock shelter walls along with red ochre, manganese and chalk images are probably not meant as propaganda; they may have had some spiritual meaning in the way that a shaman would represent a :vision quest" of some sort.  Circa 3000 BCE in some parts of the world - writing started with pictographs and then around 1900-1700 BCE actual writing can be deciphered. More often, images such as the one above confer  the idea of poking fun of a situation or person. They aren't dated which makes it difficult to assess. However, one can imagine a rebellious teenage Egyptian bo
Read more 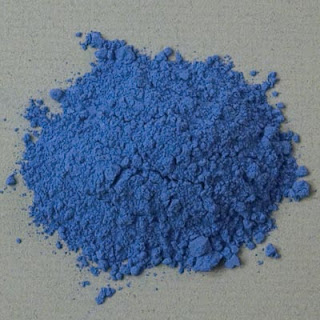 For all the pigments we discussed in the Alchemy of Pigment workshop, I found a wonderful web site that has all the colors from minim to lapis lazuli to Egyptian blue to orpiment. https://www.naturalpigments.com/oil-painting/pigment-powders.html Egyptian blue pigment from Natural Pigment website.  Egyptian Blue  is a copper calcium silicate that was the first synthetic pigment and the most extensively used from the early dynasties in Egypt until the end of the Roman period in Europe. Next is orpiment pigment powder from Natural Pigments . Orpiment  is yellow arsenic sulfide, a rare mineral usually described as a lemon or canary yellow or sometimes as a golden or brownish yellow. Our orpiment is an intensely bright pigment of crystalline particles from Kyrgyzstan. Warm cinnabar pigment from Natural Pigments prepared from ore deposits near Nikitovka in the Doneckaia region of Ukraine. It exhibits a beautiful masstone color of strong red with a tendency toward reddish o
Read more

Ginger da Costa
I've traveled extensively since 1981 from England to Cambodia, Egypt, Sicily, South and Central America and back to the UK. sharing the stories of others and their successes despite adversity, their creativity, their humor and yes, sometimes sadness links me to the world of humanity and increases my love and compassion for everyone. Travel, for me, makes my world brighter and fills my mind with possibilities and hope. I've learned valuable lessons through travel and the people I have met.